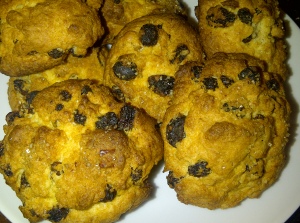 I wanted a quick bake to go into packed lunches and since I haven’t used Marian Keyes – Saved by Cake yet I decided to turn to the first recipe which was rock cakes. I don’t think I’ve made rock cakes since I was at school. Her book is aimed at beginners and whist I’m not a beginner I bought it because I was interested to read what she had to say about how baking helped her with her depression. The book is lovely, a nice range of recipes beautifully photographed so you can see what they should look like. she is very honest about her depression and her ability to bake when she started and how baking helped her.  Her rock cakes were nice, but not as good as the spare rock cakes Maria sent me home with after her charity book evening, that may be me not the recipe, I used softened butter since I had some but the recipe didn’t specify and I wonder if it should have been cold butter. My oven was a little too hot so they were a bit more brown than golden brown after 15 mins. But these really are very easy to make.